The Weather has been exceptionally changeable this week. We started the week with relatively mild weather for this time of the year and good fishing was had by all, with most catching double numbers using a mix of Buzzers and pinkies.

Kenny Gill from Whickham caught 15 fish, Mr.Grey from Felling caught 25  and Gareth Done from Seaham 23 across all the lakes.

Sharpley Springs offers complimentary days fishing (catch & release) to our regulars on Christmas day. We had a great turn out with Alan Woods from Seaham catching 16 in total using either a Pinky or a Black Fritz, whilst Mr.Anderson from Bedlington caught 15 using a thin Black.

Boxing day saw a great turnout with the sun shining, Chris Micalef from Stockton had the best results catching 20 fish in all using Olive Damsel.
As the winds picked up on the Friday, we didn’t see any fishing, but the 28th was a beautiful day at the lakes, with clear skies and good fishing to be had. Andy Grabham from Stockton caught 22 fish in all, with Nymph and Olive Damsel being used.

We have seen relatively mild, but unsettled weather over the weekend and Monday, the fishing has though remained good, with anglers using a mix of buzzers and olive worms successfully.
Ben Race from Great Ayton caught 24 fish in all using Buzzers and olive worms and slow figure of eight retrieve.

As 2013 draws to an end The Big Fish of the week and one of the largest of the year was a 21LB beauty, caught by Steve Greathead from Lumley using Olive/Bloodworm from the Albert and Alice

Sharpley Springs would like to wish you all a Fantastic New Year!

Tactics
The unsettled weather ,predominantly from the south-west again, has kept temperatures comparatively mild so buzzers have presented in autopsies.Teams of flies that include a black pupal pattern (or Diawl Bach ) together with the obligatory bloodworm imitation (pinkies remain must-tries ) have done well.
Pulled worms were consistent too, as were the bigger lures, predominantly in black or white.
The hot spots were,again,at the upwind (flat water)and down-wind (rough water) extremes, depending on wind strength/temperature. Such considerations are vital at any time of year, but more so in the winter months. Any accumulations of warmer water will harbor a lot of trout, usually eager to feed.

Tagged Fish Christmas Bonanza
This week it has been a double Christmas Bonanza! On Tuesday 17th Geoff Curry from Durham, hauled in the first Tagged fish of the week using a Bloodworm on the Doxford, netting him and his Fishing partner Bob Chicken a whopping £500! Geoff has been fishing at Sharpley Springs since 2004 and said he was delighted.
( I think they’ll be having more than Chicken Curry this Christmas)
Then on Thursday Andy Saunders from Newton Aycliffe caught the second Tagged fish on the Alice and Albert using a Zeech. Andy had a great mornings fishing , catching 12 fish in all, which included a 6lb brown and a 8lb Bow.

Double Numbers
Jimmy Drew from Wallsend also had a good morning on Thursday, catching 19 fish in total on the Hangmans and the Noose, using Hares ear and White Luce.
On Friday am there was double figures, had by Derrick Green from Sundrland, fishing on the Hangman using an Olive Nymph he caught 10 fish in all, whilst on the Doxford Steve Crisp from Stockton caught 17 using a Blood worm and Black Buzzer.  Whilst in the afternoon Gary Mulholland  from Gateshead caught 22 fish on the Doxford using Olive Worm, whilst his fishing partner Colin Grey caught 13 using white zonker and a consett budgie. On Sunday Eric Carmichael from Rollings Gill caught 12 fish using a Pinky and Cormorant Killer


John Hartland from Billingham caught a  a 13lb beauty on the Doxford using a Diawl Bach and Alec Harvey from Cramlington caught a 12.5 pounder using a Zonker.
Posted by Sharpley Springs at 9:56 AM No comments:

Congratulations to Andy Saunders for hauling in the second tagged fish of the week at Sharpley Springs Fly fishery!
Andy has been fishing at Sharpley Springs Fly Fishery for the last 10 years. He had a great morning catching 15 fish in total on the Alice and Albert and another 7 on the Doxford. He netted a 6lb Brown and a 8 lb Bow, before hauling in his bumper catch using a Zeech, giving him a hefty £500 to take home! Santa certainly has come early for Andy! 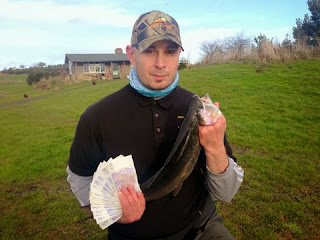 Posted by Sharpley Springs at 7:05 PM No comments: 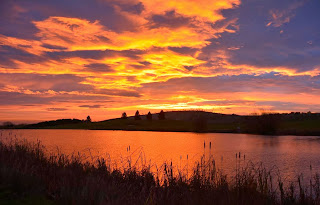 Posted by Sharpley Springs at 11:54 AM No comments:

Tagged Fish: It was a Chicken Curry Christmas Bonanza!!

It was a Chicken Curry Christmas Bonanza at Sharpley Springs Fly Fishery this morning!

Geoff was using Bloodworm on the Doxford, when he landed his impressive haul!

Geoff Curry has been fishing at Sharpley with his fishing partner Bob Chicken, also from Durham since 2004 and will both be sharing the £500 winnings!
There are still tagged fish to be caught at Sharpley, so there still could be another Christmas Bonanza....! 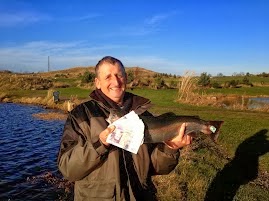 Posted by Sharpley Springs at 11:51 AM No comments:

A tad blustery at times! Quieter moments though had anglers taking to the usual lakes. These were zonkers, nomads and Minkies, with black, whites and occasionally olives working. A slightly more 'natural approach' payed dividends at times with bloodworms scoring well. Pinkies remain number one, either slow drifted or suspended. Milder weather at the weekend saw fish looking up and dry. Bushy offerings were again worth a try as where Black Buzzers.
Fly Box:
Black Buzzer
Pinky Bloodworm
Olive worm
Sedge hog
Black/white Zonkers
Cats
Black and green nomad
Minkies
Well done to David Todd from Gateshead for his 15lb catch using Bloodworm.
Although no double numbers in weight Alec Harvey had a good morning on the Doxford catching double numbers on the Doxford.
David Milborn also had a good morning catching double numbers over the Doxford, Hangmans and Noose using Bonnyleech.
The weather has got markedly cooler, so it will be interesting to see what the next week will bring!
We still have a couple of Tagged fish yet to be caught! I 'Brucie Bonus' before Christmas perhaps?
Posted by Sharpley Springs at 4:19 PM No comments: